We hold our hands up for a rash decision. The Terminator looks pretty darned good! 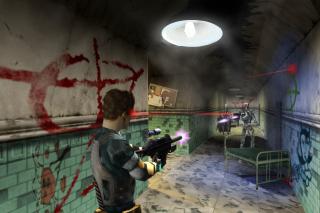 All Images (2) »
We were sceptical when Infogrames released the first information on its upcoming PlayStation 2 game The Terminator, the license it acquired earlier this year.

We were greatly disappointed with the description of The Terminator as ?a third-person action game.? It is a bit lowest common denominator though, and as such, we don?t feel too stupid to report that the latest screens from the game look very good indeed.

Both screens show the nightmarish and claustrophobic world of future LA and the fight to keep the Terminators out of the areas inhabited by the humans unlucky enough to have survived SkyNet?s nuclear naughtiness.