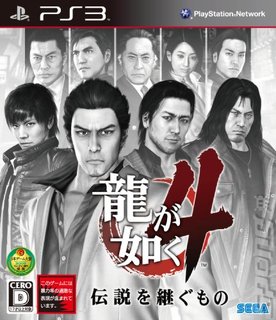 Kazuma Kiryu shows that even at his ripe old age he's able to smash the competition, as Yakuza 4 dominates the Japanese Software Charts (15th - 21st March 2010, courtesy Media Create). It's one of several new releases this week, but the high profile of Toshihiro Nagoshi's gangster series has led to an impressive launch for SEGA's adventure beat-em-up.

The only other new entry into the Top 10 is Namco Bandai's Gundam Assault Survive, but it helps lead the PlayStation Portable to victory as it claims the most chart games this week. Sitting just outside at #13 is God of War Collection, released this past week by Capcom oddly enough. Perhaps SCEJ doesn't see any domestic value in Kratos.

It's the usual shuffle of games from the last month or so in the rest of the Top 10, with Pokemon Ranger: Tracks of Light still riding high and Sony's What Did I Do To Deserve This, My Lord!? 3D taking camp towards the bottom of the chart. What we would like to know is how come Tomodachi Collection is still managing to cling on as long as it has? The game was released last June!
Companies: Koei Namco Bandai Nintendo SCEJ SEGA Square Enix
Games: New Super Mario Bros. Wii Wii Fit Plus