And Yakuza 4 isn't even out in Japan yet. 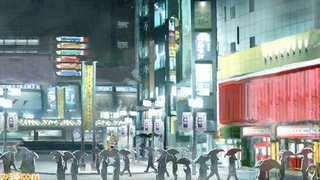 It really is Yakuza week at SPOnG. Not only has Yakuza 3 finally been released in the West, and not only is Yakuza 4 just round the corner for Japanese gamers, but Sega has also teased that it is working on another game in the gangster series.

Famitsu (via Andrisang) reports that "Project K" was announced at an event in Tokyo last night. Series director - and fantastically tanned man - Toshihiro Nagoshi is taking the helm with what is suspected to be a spinoff title in Kazuma Kiryu's troubled universe.

A teaser video showed the familiar setting of Kamurocho, with a "young man" walking the streets in the rain. Throughout the trailer, the following phrases flew by the screen; "The boy knew the graveness of the crimes he continued to commit / The boy doesn't know that cruel fate awaits / But the boy knows that fighting is his destiny."

If we were to put our guessing hats on, we'd say it sounds an awful lot like a prequel starring a young Kazuma. But maybe it's a story involving a brand new character. No platforms and release dates were announced for the game, but we'd be surprised if it wasn't heading for the PlayStation 3 at least.
Companies: SEGA
Games: Yakuza 3