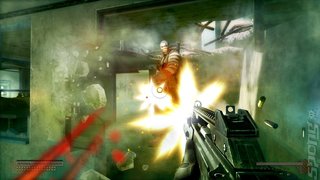 Codemasters has revealed the first details of its new shooter, Bodycount, and designer Stuart Black has spoken about how he wants to create an intimate action game using ultra-destructive scenery and realistic gunplay.

In Bodycount you work for an agency only known as the 'Network', eliminating enemies that are only described as 'Targets'. Your job is part of a bigger picture, as a global power stuggle rages on - your actions in the present help the Network succeed, but during the campaign you see a glimpse of the future and face your conscience.

"If Race Driver: GRID was all about the purity of racing, then everything in Bodycount is absolutely centred on the bullet and its impact on the world," said Stuart Black, who has previously worked on EA's popular shooter Black.

"Our shredding tech enables us to create a different kind of gameplay, where players and AI can’t hide behind indestructible cover and rely on whack-a-mole mechanics. Here the environment is constantly changing as the game world is shot to hell; it’s going to be a huge amount of fun."

Bodycount will feature online multiplayer and co-op modes, with the maximum number of players being 12 - this is due to the sheer number of destructible objects and scenery items that can be mashed. The main game's campaign mode will remain a single-player too - Black told Gamespot that this was to tell the story of the lead character in more intimate detail.

"I wasn't particularly interested in making another shooter, right," Black reveals. "I wasn't really ready to go dipping my toes into those waters again….But, I'm a great FPS fan myself, right, I love playing FPSs and there was just this itch." The designer told Gamespot that he believes the destructible environments would better those in recent UK #1 Battlefield: Bad Company 2.

Finally, a release window - Bodycount is on track to be released in the first quarter of 2011.
Companies: Codemasters
People: Stuart Black
Games: BLACK Bodycount

config 9 Mar 2010 13:33
1/1
Yay! A spiritual successor to BLACK - another of Criterion's creations squandered by EA (the other being Renderware, obv)