Bizarre too busy making the game itself perfect. 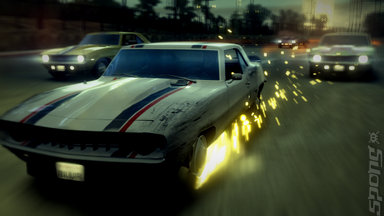 Bizarre Creations has said that it plans to release downloadable content for its upcoming racer, Blur, but it won't be ready for the game's launch in May.

The studio has opted to focus its development time on perfecting the game, following the start of its official closed Beta on Xbox Live. Feedback and problems that arise when people try out the online racing modes will be used to make the game better, according to lead designer Ged Talbot.

"I don't have any dates for DLC, but what I can say is it's always been a massive part of the strategy to support the game with DLC," Talbot told MTV. "We do have plans, but no one has worked on it yet."

Not in the Blur Beta? Silly billy - SPOnG has a truckload of codes just for you! Go and take part in our not-really-a-contest and grab yourself one, won't you?
Companies: Bizarre Creations
Games: Blur