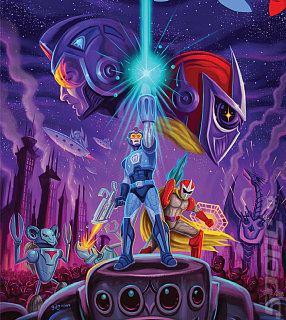 Nintendo is treating us all to some good gaming this week, as the Wii Shop Channel gets updated with several titles to keep the boredom away this weekend. Mega Man 10 (1000 Points) leads the way on WiiWare, challenging you to Wily's latest deadly creations - including (snigger) Sheep Man.

BIT.TRIP.VOID (600 Points) finally comes to WiiWare today as well - the 8-bit inspired arcade game is buckets of hardcore gaming fun, as we found when we played it some months ago. Get bigger as you collect black dots while avoiding the white ones. It's harder than it sounds.

The DSi gets a heap of bite-sized games to download via its own Shop Channel too, with a remake of the 8-bit classic Dark Void returning as Dark Void Zero (500 Points). Fun for retro rocketmen! Globulous Party (500 Points) is a mini-game fest featuring 20 short activities - most of them sports-related. For those who want REAL sport though, you can grab Gameloft's Real Football 2010 (800 Points).

Pinball fans aren't left out either with Pinball Pulse: The Ancients Beckon (500 Points), which is totally worth it for hearing Brian Blessed's voice as Greek God Zeus. Brian Blessed makes everything better. For the non-gamer in you, there's a New English Training episode called Learn With Tempo (800 Points) and EA's interactive storybook Flips: The Bubonic Builders (500 Points).

Finally, SEGA gives the Virtual Console some love with the 1980s coin-op game Zaxxon (500 Points) on the Arcade. And thus wraps up a rather eventful Nintendo update. Whew.
Companies: Nintendo
Games: Mega Man 10