Everything you need to know from QuakeCon 2001 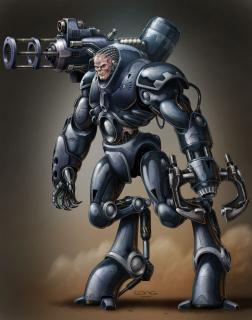 New art from the Quake team
It was QuakeCon last weekend, id Software?s annual event at which id, armed with Activision?s more-than-generous chequebook, shows the world what it has planned for the future.

This year, the event lacked the punch of previous years, as most of the news released by id has been in the public domain for some time.

The big news from the event is the outsourcing of Quake IV to Raven Software. Raven boss Rick Johnson held a question and answer session with attendees, with the title ?What do You Want to See in Quake IV??

The storyline has not yet been determined. There were calls to begin the latest instalment of the series from the end point from Quake 2, with your character crash-landed in an escape pod after fleeing from Stroggos. The general sentiment was that more complex storylines are preferred.

Also brought up was the fact that first person shooters are dogged with cliches. People said they are sick of playing in sewers, vent ducts and rooms full of crates. There was mention of the mapping system used in Half Life, a game that gives the feeling of a continuous unbroken adventure. It was stressed that this is preferable to other map formats.

Stealth gaming was discussed. Although there were calls to include stealth aspects in single player mode, most gamers preferred an all-out blast. Puzzles were discussed at great length. It was agreed that the time-served model of collecting keys to unlock doors was past its best.

On the subject of enemies, it was agreed that massive bosses were the way forward. Serious Sam was used as a good model for this. It was also agreed that weapons should have multiple firing options, a la Unreal Tournament.

The main topic of the discussion was to clearly define what players wanted out of a new Quake title in single player mode. Multiplayer options were discussed but no details were forthcoming, other than the fact that multiplayer will play a part in the new game.

At a press conference, John Carmack revealed some, (but not much) new information on the latest Doom title, currently underway at id Software.

The latest Doom engine is said to be shaping up well with phrases like ?redefining computer generated 3D,? and ?completely new evolutionary pattern,? bandied about. He mentioned that this latest Doom game will be ?more aggressive on hardware requirements than past id titles were.?

When discussing the options for a foray into the console market, Carmack ruled out the possibility of a PlayStation 2 version, saying the console was not powerful enough to handle the new Doom game. Carmack instead said the Xbox was his console of choice, stating ?it is in the sweet spot?? as far as graphical capabilities go.