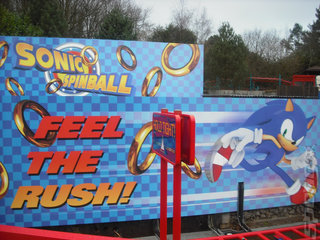 All Images (8) »
Sega officially opened its Sonic Spinball ride at Alton Towers on Friday afternoon, and Svend SPOnG was among the very first people to put it through its paces. The partnership between the publisher and leisure resort also included a tour of the special Sonic the Hedgehog themed Suite.

The rollercoaster features several four-seat pods shrieking around a twisting course full of V-shaped dips and vertical U-turns. The madness takes place in a spinning capsule too, so by the time you end up shooting down the drops you're facing your imminent descent (and hopefully not death) right in the face.

Svend SPOnG, the biggest Sonic the Hedgehog fan in the world (probably), earned the prestige of being the very first person to sleep in the Ł300-a-night Sonic Suite. Decorated all kinds of themed objects ? Chaos Emerald lampshades, life-size palm trees and colourful Green Hill Zone backdrops ? this room is enough to make any fan weep.

The Suite includes a widescreen TV, Wii, PS3 and Xbox 360, along with a loan of several controllers and Sonic games for each console. After several rollercoaster rides and an open bar until 2am, it seemed fitting that the only game we could legitimately play was Mario & Sonic at the Olympic Games.

Alton Towers' new 2010 season just kicked off this weekend, so you can make your way to the theme park now and find the Sonic Spinball ride sitting there in full operation. The Sonic Suite, complete with 'Sonic' greeting every time you open the door, will be available to book from March. The way it's looking though, you'll need to fight a lot of interest!