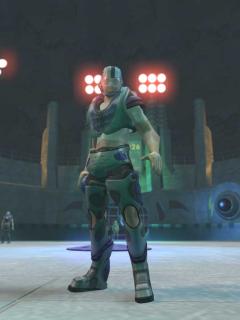 Famed Amiga developer Bitmap Bros has announced that it is hard at work on a new Speedball game for a home system, the fourth in the series that has spanned more than a decade of gaming.

At this point in time the initial ideas for the game are being thrown around on PC in Bitmap?s studios but in an exclusive interview, Mike Montgomery told us, ?We are just using PCs and Macs at the moment because that?s what we have in the office. There has been no decisions made regarding what platforms the game will feature on.?

Relating to the format of the game Mike told us, ?We see Speedball as being a massive multiplayer game over the Internet. We can see it taking over form some of the other games that are dominating this field at the moment. Most Internet gaming is fairly heavily involved. There is hardly anything that has that pick up and play feel that Speedball will have.? This is true. Most online gaming takes the form of either first person shooters or real-time strategy titles. There is hardly anything arcade-like in gameplay.

?The reason that Speedball will work over the Internet is simple. It is a simple game with millions of possibilities, the best sort of gaming experience. Every game follows the same format but each is different. We will deliver the Speedball title to a very specific format. It will be one player controlling one Speedball character. This will enable teams and clans to develop, with each player performing a certain part of a team.?

We can?t wait! There should be some more Speedball news in around three week?s time so stay tuned!