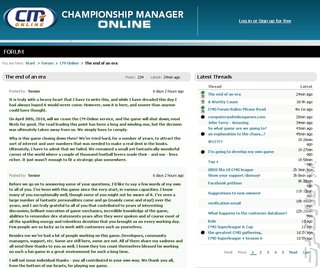 The news was brought to the loyal CMO users on the official site as follows:

"It is truly with a heavy heart that I have to write this, and while I have dreaded this day I had always hoped it would never come. However, now it is here, and sooner than anyone could have thought.

On April 30th, 2010, will we cease the CM-Online service, and the game will shut down; most likely for good. The road leading this point has been a long and winding one, but the decision was ultimately taken away from us. We simply have to comply."

One reason for the closure of the Beautiful Game/Jadestone developed title that had been run under the aegis of Eidos before its recent take-over by Square Enix, was given:

- "We?ve tried hard, for a number of years, to attract the sort of interest and user numbers that was needed to make a real dent in the books. Ultimately, I have to admit that we failed."

This was followed by this admission, "We - at Jadestone - cannot talk about the decision to close the game, due to contractual obligations. We will not answer or comment any such questions. The game, the brand, the internet domain and the subscriptions are all owned by Eidos and the decision to cease the service is entirely theirs to make. The decision was made unilaterally by them, and we are not at liberty to comment on any reasoning."

This is how the game will die: