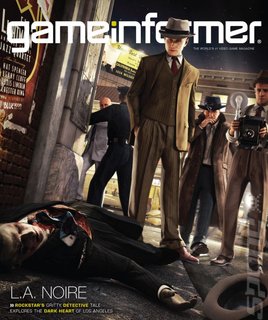 L.A. Noire is no longer a PlayStation 3 exclusive, confirming a rumour that sparked on an anonymous Twitter account that suggested the game had been “ported” to other systems. That system, according to GameInformer staffer Matthew Kato, is the Xbox 360.

The magazine revealed its March cover on its website, with Team Bondi's latest title taking the lead story. A render of the game is being used for the front and back covers of the issue. The magazine itself will dedicate ten pages to the game, exploring “the game's astonishing reconstruction of 1947 Los Angeles and how the team took on such a massive undertaking.”

Kato, in response to an earlier comment to the article, wrote; “It's not a PS3-exclusive. It was at one point, but it's coming out for the PS3 and 360.”

Perhaps this explains Rockstar's exclusivity of Agent for the PlayStation 3 – another rumour from the anonymous Twitter user, which said that such a deal was made in lieu of Sony getting any of its $20 million investment in L.A. Noire back. But who really knows?
Companies: Rockstar Team Bondi
Games: L.A. Noire