Star Ocean 4 International Has "Nothing Deleted"

Size of Blu-ray fits everything in nice and tight. 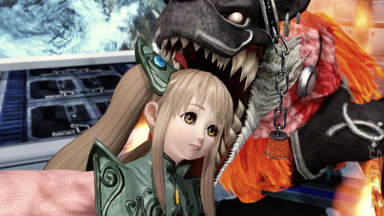 Tri-Ace and Square Enix fans got to ask questions in a Dengeki interview with producer Yoshinori Yamagishi over the PS3 release of Star Ocean 4 Last Hope International. In it, the Square Enix developer stated that nothing was left on the cutting room floor.

The Xbox 360 version was released in Japan about a year ago, and there were concerns that content had to be deleted from the game due to the size of the DVD format discs. Yamagishi sharply addressed the matter for the PS3 edition, saying the same was not the case for International.

A reader asked, ?For this version as well, were there any areas that you were forced to delete due to memory capacity and other things?? Yamagishi said, ?If 'this version' means the PS3 version, there was nothing deleted.?

That's something of a win for PS3 owners who've had to wait extra time for the game over their 360 cousins. There has been a trend in Japanese RPG developers to create a game as a timed exclusive to the Xbox 360, then porting a version to the PS3 with added bonus material.

Speaking on the future of the series, Yamagishi also said that Star Ocean 4 International would likely be the last in the series, unless ?a request for production comes in from tri-Ace?. ?At the very least, I don't think I'll be dealing with the series,? he revealed.