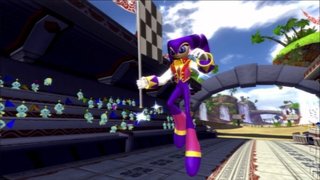 A campaign from a NiGHTS Into Dreams fan community has successfully pushed for an appearance of the Sonic Team character in Sonic & Sega All-Stars Racing.

Sumo Digital producer Steve Lycett posted on the NiGHTSintoDreams.com fansite confirming that NiGHTS will be present as a flagman – essentially the 'Lakitu' in Mario Kart – after some screenshots leaked a couple of days ago.

Leaders of the fansite, TRiPPY and DiGi Valentine, created a petition called “Don't Forget NiGHTS” some months ago, following rumours that the character was not to appear as a playable character. Lycett, under his online handle 'S0L', revealed the inclusion of the character was based entirely on answering the campaign.

“I have to admit the main reason he’s in was after we saw your heartfelt pleas, especially those of DiGi and TRiPPY, we had to make sure NiGHTS was in and played an important role,” Lycett wrote. “So whilst he’s not playable, he very much made it in, and as a result of the huge amount of support for the character that you all showed.”

So does the inclusion change anything about potential future DLC? “Well, depends on how many copies get sold, and which characters SEGA then may request,” Lycett muses. “Just because he's the flagman now doesn't mean he can't be made into a playable character. If anything we've got a head start since he's built, rigged and animated.”

The producer clarifies that he cannot say one way or the other if NiGHTS would be a future playable character.

So, a win for a passionate gaming community and a developer that listens. What a nice story, eh? If only everyone was this nice to each other.
Companies: SEGA Sumo Digital
Games: Sonic & SEGA All-Stars Racing