Demo due a month before release 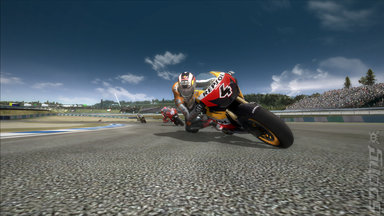 Capcom confirmed a demo of MotoGP 09/10, and revealed DLC plans to SPOnG during a playtest of what might be the biggest ever multiplayer mode for a console racing game.

'Biggest' in terms of the number of players, that is. At a press event on Wednesday, the game's lead designer, Greg Bryant of Monumental, confirmed that the game will support up to 20 players online. “I think this is probably the highest number of players in a racing game on consoles to date”, Greg said.

He went on to explain that, “We have a full voting system in our lobby, so once you've got all 20 players in they can vote on whether they want to have full length races or race out the full season. If they choose to race out the full season, they can choose what they want to race next. You can progress through all 17 races through a process of voting and elimination. That tallies up the scores in the lobbies and you can see how well you're progressing against your friends.”

The demo, for its part, will be out a month before release, which is pegged for some point in March. "Play as your favourite GP hero in a battle to cross the finish line and be the star in Championship mode or race against the clock in Time Trial. For those who like to take a risk you can show off your skills in the Arcade mode where extra time will be added for pulling off daring manoeuvres but put in a bad performance and your dreams of victory will be over", Capcom tells us.

As for the DLC: "There will be two free DLC packs, the first pack will contain the 800cc bike class with all the bike, rider and team liveries, plus the brand new tracks for the 2010 MotoGP – Silverstone (UK) and Balatonring (Hungary). The second pack will include all the bike, rider and team livery updates for the 600cc and 125cc bike class, giving players everything they need to play the season earlier than ever before."