One WiiWare, one Virtual Console and three DSiWare games for you today. 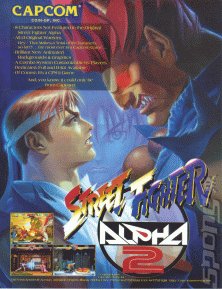 It's Friday, and that means new games are out today to satisfy your WiiWare, DsiWare and Virtual Console cravings. This week, you get the chance to save the planet from evil aliens, play with music with Electroplankton and Hadouken your way through a long list of world warriors (again).

On WiiWare, 530 Eco Shooter pits you against the Cannoids, who are bent on destroying the world by controlling Earth's empty cans. Yeah. This first person shooter arms you with a recycling cannon which doubles as your health, with each shot draining your energy ? you've got to pick up Can Energy left behind by destroyed enemies to regain strength. The game will cost you 1000 Nintendo Points.

The DSi sees the return of the Electroplankton, the groovy little fish that helped you explore different musical sounds and instruments. The original DS game was released back in 2005, and didn't sell too well at all, so perhaps a digital download is the best place for them.

You get two different applications here, each costing 200 Nintendo Points; one is called Sun-Animalcule, which changes pitch depending on where and how they grow during their brief life cycle. The other's called Luminarrow, form arrow-shaped formations, that create different pitches of sound based on their direction.

Gameloft has also released Legends of Exidia on DsiWare, for 800 Nintendo Points. It's an action RPG where you level up to enable powerful attacks and magic spells, with seven chapters featuring 25 side-quests and 22 different environments.

For those looking for some retro action, the Super Nintendo version of Street Fighter Alpha 2 is available for 800 Nintendo Points. Seems we can't go a month without a new retro Street Fighter game coming out here, surely we're running out of the different iterations by now? This one introduces Alpha Counters and the Custom Combo System for fighters to create their own chain of attacks.

And that's your lot. These titles should be available on the Wii and DS' Shop Channels for you right now. Go get 'em.
Companies: Capcom Gameloft Nintendo
Games: Electroplankton Street Fighter Alpha 2