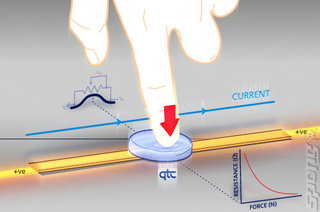 Matthew Humphries over at Geek may be putting two and two together and coming up with 22 when he speculates that the Nintendo DS2 could "ship with a pressure sensing touchscreen", but it's worth a read.

Humphries speculates that a deal between UK company Peratech Limited and Japanese display company Nissha regarding Peratech's Quantum Tunneling Composite (QTC) technology could be taken up by Ninty for its handheld.

Engadget takes up the story, explaining, "this new methodology revolves around a 75-micrometer (less than a tenth of a millimeter) quantum tunneling composite, which display makers can add to their screens relatively cheaply and painlessly.

"The pressure-sensing layer consumes no power when it isn't depressed and requires a miniscule (sic) two micrometers of movement to register a touch."

Humphries speculates that because Nissha supplies Nintendo, the DS2 will use something like QTC.