CEO says the game is an "innovative product". 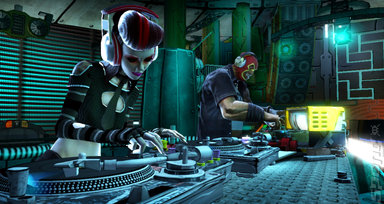 If you weren't that interested in Activision's DJ Hero last year, feel safe in the knowledge that the publisher is doing all it can to ensure you'll want to pick it up this year, with CEO Bobby Kotick confirming a sequel to Game Informer in a recent interview.

Speaking on the somewhat limp reaction to 2009's plastic deck-scratching game, Kotick says, ?If you're going to make a commitment to doing something original, the odds are that you're not going to get it right on the first chance.? Which is sort of true, given that DJ Hero's big brother, Guitar Hero, didn't make waves until its second or third iteration.

Not sure if we agree with Kotick on the following though; ?I think DJ Hero is a really innovative product. I can't wait for you to see next year's.? We'll have to see if the music peripheral-based rhythm game still has legs in the new decade, given that the entire music genre slumped by 40 per cent in sales during 2009, compared to 2008.

Reaffirming Activision's skill for persistence in the market, Kotick finished with a strategy that echoes that of its arch-rival, Electronic Arts; ?That's the thing, we're sticking with it. We'll stick with it and get it right. But it's going to be less games, better games. That's our strategy.?
Companies: Activision
People: Bobby Kotick
Games: DJ Hero