The battle continues between Sega and Namco 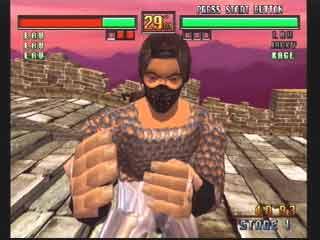 All Images (5) »
Namco and Sega are about to go head to head in the arcades of Japan, releasing their highly anticipated fighting games Tekken 4 and Virtua Fighter 4 on today.

The similarities between the circumstances of the two machines are uncanny, and this clashing release date seals the fact that the games are forever entwined.

Both companies are releasing the games on new hardware, Namco on its PlayStation 2 porting machine System 264, and Sega showing off its Naomi 2 machines for the first time. Also, the games have been arch-rivals from day one.

This next round in the arcades between Sega and Namco is just the latest in a long line of rivalries. Witness Virtua Cop vs. Time Crisis, Daytona vs. Ridge Racer and of course Virtua Fighter vs. Tekken.

There may be more to this than meets the eye, though. Japan?s beleaguered arcade scene needs blockbuster games to drag gamers out of their living rooms and into the big wide world. The two games combined pulling power should see a better than usual turnout.

Hot on the heels of the two high-tech 3D fighters comes Capcom Vs. SNK 2: Millionaire Fighting 2001, which is released in Japan on the 3rd of August.