Game's director thinks the Wii's not done with hardcore games yet. 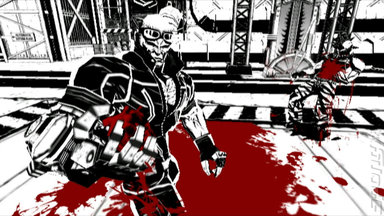 Lovely game.
Would you like to see a sequel to Madworld? The game's director, Shigenori Nishikawa, has expressed an interest in making a follow-up to the chainsaw-heavy battle royale in a recent interview.

?I think Madworld was very well received and was acknowledged for its innovative graphical style and gameplay. We would definitely be interested in making a sequel in the future,? were Nishikawa's exact words.

Contrasting with recent comments by Sega (follow the interview link in our news story) that pursuing the 'hardcore' market on Nintendo's console is a fruitless exercise, the Platinum Games developer revealed he had no problems with making such a visceral game to a family-friendly platform, calling the Wii ?a very well-balanced piece of hardware.?

Guess you gotta balance creativity with profitability. Platinum Games has been a jewel in Sega's publishing crown recently, so the studio's interest in a sequel may force the house of Sonic to change its mind.
Companies: Platinum SEGA
Games: MadWorld