Will continue to create original games. 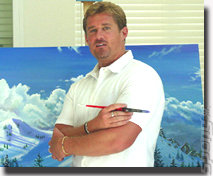 Glen Schofield, keen painter.
Former head of Visceral Games and the man behind Dead Space, Glen Schofield, has suggested that his new role at Activision won't restrict him from exploring unique and creative game ideas.

In a recent interview Schofield, now leading startup Sledgehammer Games, spoke of Activision's emphasis on franchising its key IPs and said his new studio was hired for something more original. ?[Activision] hired us for our track record and vision, and they are supporting our plans, ideas and creativity 110 per cent. It's refreshing; the trust that they have given to us, and we don't take it lightly.?

?In fairness, most Fortune 1000 companies are built around a predictable revenue model, and Activision is no different,? Schofield says of the publisher's approach to game development. ?Developing and publishing games is expensive, and funding those efforts means having a profitable business model. Annual installments are a necessary component of that model, but definitely not the entire model.?

Schofield has been among those credited for changing the publishing landscape at Electronic Arts, where his idea for new IP, Dead Space, came at a time when the company seemed only interested in annual franchise updates.

?I brought the idea [of Dead Space] to the previous president when I believed the window was right for the game to fit within EA's portfolio,? Schofield recalled. ?At the time, EA was largely leveraging licensed IPs, and getting support for a new IP concept was tough.? The game's release accompanied that of Mirror's Edge in 2008 to symbolise a fresh direction for the FIFA giant.

Perhaps his new work under Activision can achieve the same results. Sledgehammer's first project, however, is rumoured to be based on the James Bond series, but Schofield stays tight-lipped on the subject. ?I can't give you any details yet -- except that it will be in the action genre, and that we committed to delivering something that surpasses our previous titles in terms of critical and commercial success. We believe the game will be quite unique and will bring something new and exciting to our fans.?
Companies: AD Activision Electronic Arts Sledgehammer Visceral
People: Glen Schofield
Games: Dead Space