No DLC, Multi-Player for Darksiders 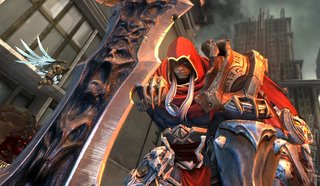 Darksiders' creator (as well as X-Men and Battle Chasers' maker) Joe Madureira has admitted that the apocalypse-riding game won't be getting DLC or multi-player because developer Vigil couldn't make either brilliant.

Joe 'Mad' was speaking in an interview today (full thing here), in which he said:

"We realised early on that we wouldn't be able to pull off the scope of game we wanted to and have it be multiplayer. We were a new team building new tech and a new IP. We had our work cut out for us.

"Vigil has a very strong all-or-nothing mentality, and if we're not confident we can pull it off, we're not doing it. So we focused on making the most kick-ass single-player game possible."

As for DLC, "Sorry, we aren't currently planning any DLC content for Darksiders."

He also brings his comic-book writing background to the fore for game development and publishing, "Until recently there wasn't that much emphasis on game stories. It's not what sells a game - it's all about the gameplay. Comics still produce fantastic stories, it's still one of the purest visual storytelling mediums, which is why it still makes such an impact."

All is not quite so dour though, despite the fact that "most game stories stink" Mr 'Mad' states that "It's an exciting industry and I love being a part of it, though of course I do miss comics".

Our Darksiders review will be up and around a little later... by Mark "Comic Book Man" SPOnG.
Companies: Vigil Games
People: Joe Madureira
Games: Darksiders

shaxmustbegay 8 Jan 2010 20:10
2/4
i only buy games with online multiplayer, I have plenty of games that i have never even started the campaign mode
more comments below our sponsor's message