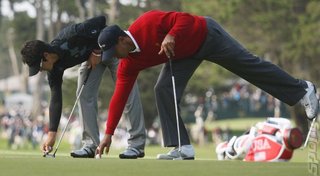 In it, he says, "For the past month, we have watched the Tiger Woods story play itself out while several of his sponsors have stepped away from the golfer. At EA SPORTS, we?ve been particularly attentive because for the past year, we have been in full development of a new and highly innovative, online golf game. The game has been in closed beta for eight months, with more than 75,000 people playing and participating."

And, what about Tiger?

"By his own admission, he?s made some mistakes off the course. But regardless of what?s happening in his personal life, and regardless of his decision to take a personal leave from the sport, Tiger Woods is still one of the greatest athletes in history", says Moore before stating that the online game isn't going to slip.

"Our relationship with Tiger has always been rooted in golf. We didn?t form a relationship with him so that he could act as an arm?s length endorser. Far from it. We chose to partner with Tiger in 1997 because we saw him as the world?s best, most talented and exciting golfer. We struck that partnership with the assumption that he would remain near or at the top of his sport for years to come."

He finally gets to the nub of the matter, "Tiger Woods PGA TOUR Online is truly representative of that rallying cry, and a game that all of us at EA SPORTS are proud to be delivering this month to sports fans around the globe."

Right, so the deadline for the online roll-out is this month. The servers are set, the marketing has been paid for, ergo "We're sticking with Tiger!"