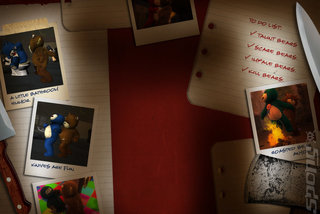 What larks!
A2M, the developer behind the distinctly under-achieving Stranglehold-a-like, Eliza Dushku vehicle, Wet, have confirmed the existence of Naughty Bear about a teddy driven to revenge.

Think of it as Happy Tree Friends & Friends but with just a bear.

The action revolves around the Island of Perfection, the angry bear, and general violence. The initial images provided include one that will guarantee notoriety, controversy and probably the necessity of defending the game as 'just cartoon violence'.

The game is published by 505 Games, the president of which - Adam Kline - says, "Players tired of the same old shoot-‘em-up, recycled gameplay are going to get what’s coming to them in Naughty Bear. The all-new scare-based points system introduces a whole new element of fun in Naughty Bear as players win the most rewards for being deviant and maniacal."

So, innovation in a mad-bear, killing other bears outing. Innovation like we saw in Wet?

- An array of weapons, objects and scare tactics, gamers strive to earn Naughty Points as they inflict physical and psychological harm on Naughty Bear’s enemies.
- The 'all-new scare-based' points system means players will win the most rewards for being deviant and maniacal.
- 30 levels to unlock.
- Saturday Morning Storyline Gone Wrong: Features a unique blend of comic mischief and syrupy cuteness juxtaposed with over-the-top cartoon violence