American gamers loved it, Europeans thought it was "ridiculous." 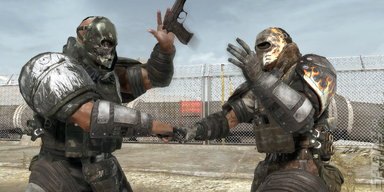 Fist Bumpin' Action.
EA Montreal?s Reid Schneider has said that he hopes Army of Two: The 40th Day will resonate more with European gamers, after the first game was passed off as "ridiculous and tasteless."

Speaking with GamesIndustry, Schneider said that the original Army of Two had a tone that was loved by Americans, but not players across the pond. ?Fist bumps? and the exaggerated nature of the action and main characters were cited as potential reasons, and the plan is to dynamically change the game based on play style.

?We had this whole market in the US that thought the tone was cool, but in Europe everyone thought it was ridiculous and tasteless and a bunch of frat boys running around. One of the things we learned was that we?re never going to be able to please both,? Schneider said.

?So the way you interact with your partner and decisions you make - if you?re doing a lot of fist bumps - these influence the tone and the dialogue of your character. If you?re taking it on a more serious level then the game reacts seriously.?

It seems to us that the whole point of the game is about the over-the-top frat-boy behaviour, but Schneider says that turn-off is not allowing gamers to see the real game; ?It?s really important for us tonally to appeal to the European audience because with the core audience in that territory, the game really turned them off so deeply that they couldn?t get to the game underneath.?

Are you a fan of the fist bump? Army of Two too brash for your tastes? Sound off in the forum.
Companies: EA Montreal
Games: Army of Two Army of Two: The 40th Day

headcasephil 9 Dec 2009 10:02
1/4
We had this whole market in the US that thought the tone was cool, but in Europe everyone thought it was ridiculous and tasteless and a bunch of frat boys
i know of a load of people that would of played it bar the fact that we could not play with are us mates most of my freinds list played it and said the same thing its sh1t because we can not play with people from the us and i had loads of mates from the us that would ask if you upset that we could not play as well

realvictory 9 Dec 2009 13:24
2/4
Hardly anyone I know has the ability to "get to the game underneath?; most people don't even know what games are - they think they're interactive movies. And then they say "yeah, but this is your view as to what a game is. Which is true, I can't deny that everything is interpreted differently by different people.

I completed the original Army Of Two in co-operative mode, not online (because I have real, physical, friends), and I enjoyed it. I'm not a fan of killing, I'm not a fan of guns, and I thought the script was sh!t - but, fortunately, I have the ability to perceive things beyond simply what is rendered to the screen infront of my face.

If you don't believe that gameplay exists, and that it's merely a combination of the other aspects of the game (graphics, sound, script, etc - i.e. "atmosphere"), then that's your loss - and I strongly do see it as a loss.

I believe that if you replace every object/character in a game with plain cubes, and it's no longer fun, then you know you've made a crap game.

As for Army Of Two - I bought it for the concept, which was successful, and, based on my experience with the original, I'm going to buy the sequel.

Fist bumps, on the other hand - what are they going to replace those with? Shooting someone in the face, then receiving a pat on the back?

DrkStr 9 Dec 2009 13:31
3/4
Schneider wrote:
It?s really important for us to sell more games to the European audience because with the core audience in that territory, the game really turned them off so deeply that they didn't buy the game.
Fixed the quote for you!

a 10 Dec 2009 13:37
4/4
I liked the first army of two. If the european fags didnt thats their problem. You shouldn't take away from our gameplay cuz they didn't think it was appropriate. You stay true to the original game not change because it was docked by half the audience. Otherwise your gonna get a s**tload of people that buy the game because they liked the first and then get pissed off cuz you changed it.
Posting of new comments is now locked for this page.