Questionnaire asks whether players will buy FIFA 11 or PES 2011. 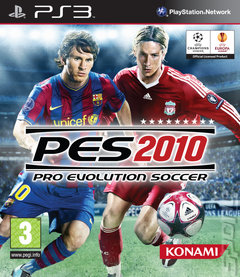 PES 2010: Was it good for you?
So, did you buy Pro Evolution Soccer 2010 or FIFA 2010 (or both, you nutter)? Well it seems like Konami?s feeling a little bit of heat from EA?s resurgence in the football game genre, with the company quizzing the fanbase on what they would like to see.

This questionnaire appears to be more than just a random ?How was your experience? kind of deal, though - themes range from graphics, gameplay, use of licenses and editing, to even EA?s own FIFA series.

The last questions in particular asks users about the likelihood of purchasing either FIFA 11 or PES 2011 next year, and a focus on what users expect the developer to concentrate on reveals a more transparent desire to maintain the series? fanbase.

?By now you should know how committed the Konami team is to getting your feedback and considering your requests for future versions of our game,? PES producer Shingo ?Seabass? Takatsuka said. ?We're about to start that process all over again with the release of an online questionnaire.

?Remember the more useful info we can get from you, the better PES will become. Anything that can't be included into the next version will be considered for future versions.?

PES and FIFA have been bitter rivals in the football game field for many years - during the PlayStation 2 generation, PES was considered by many players to be the better game out of the two, but FIFA 09 turned the tables and EA Sports' series has reigned ever since.
Companies: Konami
People: Shingo 'Seabass' Takatsuka
Games: Pro Evolution Soccer 2010