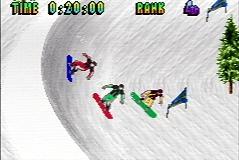 The latest games are the pocket versions of Sean Palmer Snowboarding and Mat Hoffman BMX, both for the Game Boy Advance.

Both games are set to follow in the impressive footsteps of Vicarious Visions? Tony Hawk?s Pro Skater 2 for the Advance and will be technically orientated, with a heavy slant on tricks and combos. Sean Palmer, the Elvis of Snowboarding, has had his signature game for handhelds developed by Japanese firm Natsume, of Tony Hawk for Game Boy Color fame.

The game is set on 16 different courses and features events such as half-pipe and boardercross.

Sean himself is an altogether more serious character. ?I?m a showboater-type. In boardercross I?m not just trying to get in the top three so I can advance. I?m trying to take all my heats. Most people are humble because they know how good the level of competition is. Not too many people can lay their balls on the line and deliver. It?s special when you can.

?I don?t go to the X Games just to win. I go there to freaking kill people then shove it in their faces. They don?t understand because they grew up normal.? Erm, okay Sean.

The altogether more chilled out Matt Hoffman is having his GBA game developed by HotGen. Matt Hoffman Pro BMX is much more similar to Tony Hawk?s in presentation and theme. Set in a 2.5 D environment, Matt enters competitions on the ramps and the street courses and has to pull off as many tricks and combos in the allowed time.

This will almost complete the Game Boy Advance line up for the Activision O2 brand with only twinkly-eyed dreamboat lady killer Kelly Slater left to surf in on the portable.

Both Matt Hoffman and Sean Palmer are pencilled in for a November release.