Pro Evolution Soccer 2010 sits pretty at the top of the charts. 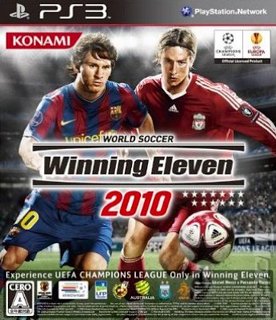 It's been a very slow week in terms of software sales in Japan. Besides the latest Pro Evolution Soccer game (which is a PS3 exclusive in Japan), new releases haven't really ignited the passion of the Japanese gamer. After a shocking knockback to fifth position last week, Pokemon Heart Gold and Soul Silver dart up to #2 in the charts this week, but it's not through blazing sales.

Last week, Bayonetta managed to shift 135,000 units on PlayStation 3. This week it sold a depressing 29,000 and yet has still managed to cling on to #8 in the charts. That's how dire things are looking. Many old games have moved up the chart by default as new entries from 7 days ago lose their appeal ? Tekken 6, after breaking 100,000 units last week and earned a third position, now sits at #11, unranked in this chart.

The only healthy game this week is Pro Evo, then. Let's see whether the next few weeks will contain some winners, or whether this is all just a ploy by Japanese consumers to save up for the Christmas release of Final Fantasy XIII...