Football Manager 2010 gets knocked down to 4th place. 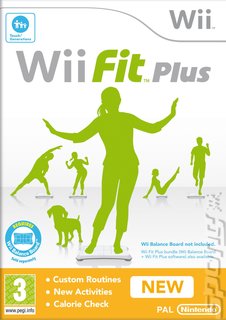 In what Chart-Track is calling the biggest release week of the year, the UK sales chart for week ending 7th November has had 41 different games added to the company's database, including 9 versions of Band Hero. Having said that, the Top 10 remains to be of no real surprise at all.

Following last week's serious-versus-casual UK Charts battle, it seems that Football Manager couldn't hold onto its #1 spot for long, being ousted ultimately by Wii Fit Plus and selling 53% less than the week before to boot. The football management sim slipped to fourth place, with FIFA 10 and Wii Sports Resort making gains to second and third respectively. This is in spite of EA Sport's football game selling 13% fewer units than the week before. Wii Sports Resort in particular has had a huge kick up the bum with a 63% sales increase, and with Christmas shopping soon to be in full effect, could well sit near the top for some time.

New entries this week include BioWare's Dragon Age: Origins, which has done well to hit the number 5 spot. Singstar Take That reached #16 on the charts, while Ratchet & Clank: A Crack In Time only managed a #22 position, underneath peripheral-heavy DJ Hero.

So, a lot of moving and shaking in the Top 10, but not a lot of fresh blood to speak of. It's also interesting to note the disparity between FIFA 10 and its bitter rival, PES 2010. A couple of years ago, those two would have been at loggerheads, vying for a better position than the other.