Brutal Deluxe for Game Boy Advance! We warned you about those Bitmap Bros! 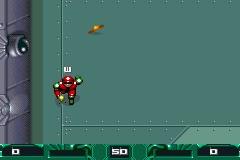 All Images (7) »
A few months back we highlighted to distinct possibility that there were several Amiga classics that were most likely waiting in the wings for a Game Boy Advance release. One of which was the excellent Speedball 2 from The Bitmap Brothers. The game, along with a few others has just been announced.

Then, Mike Montgomery told us this. “We would have worries that the crazy levels of piracy that plagued the Amiga in its heyday would still be a problem. We are still closing sites down all the time that carry images of our intellectual property from the Amiga days. This being said, there is no reason why we shouldn’t consider re-releasing the Amiga games, if it were financially possible to do so.” Talking on the Game Boy Advance Montgomery said, “We are looking at the Game Boy Advance with great interest. Xenon, Speedball and our other famous titles are all in the initial stages of “should we or shouldn’t we?” and some are even further along. We have a third party GBA development kit in the office.”

Speedball 2, Xenon II, Cadaver, Gods, Magic Pockets and The Chaos Engine have all been confirmed as heading to the Advance and all are being co-developed by portable gaming specialists Crawfish Interactive. Today, Mike Montgomery told us. “The development deal with Crawfish is highly beneficial to us. The company know what they are doing with the Game Boy Advance, probably better than anyone else in the business. There is no-one we would trust with the development as much as we trust them. The games are being co-produced and developed closely between us and there could be more to come.”