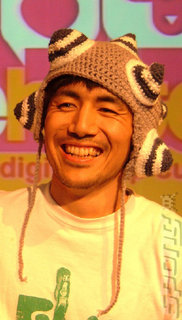 Keita Takahashi is a madman to some people and a creative genius to many others. The game designer behind Katamari Damacy, We Love Katamari and Noby Noby Boy sat down with Develop during Nottingham's Game City event (at which it was announced he's to design a public kid's playground in the local area) and said that the playground gig doesn't mean the end of his gaming design.

?I hope that people understand that what I?m doing with the playground is not a matter of shifting from one thing to another. This is all part of a single path I?m taking, my work is related, and the things I make are just branches of the same path.? Takahashi explains, before adding, ?I do have ideas for new games, but I think the one game I?m thinking about right now is even harder to explain than Noby Noby Boy.?

The crazy visionary also spoke of the state of the Japanese games industry, and the emphasis on Western games these days. The best bit was when the Katamari creator expressed an interest in working with a Western developer on a title, explaining an idea for a first person shooter he had.

?I had this idea for an FPS where the player?s character grows in size, gets bigger and bigger as the game progresses. But as you get bigger some weapons are too small to use, so you have to improvise; maybe throw airplanes at the enemies. That sort of stuff. So I have this idea of making a fun and unique FPS, with the right team it would be a good FPS.?

Good? It would be bloody amazing! This game has to be made. Keita Takahashi, we salute your nutty, amazing ways.
People: Keita Takahashi
Games: Katamari Damacy We ♥ Katamari

headcasephil 30 Oct 2009 13:49
1/2
It would be bloody amazing! This game has to be made.
yes and as i could image it will be full of Color insted of gray jet set radion comes to mind i would love that