It has a spinny globe 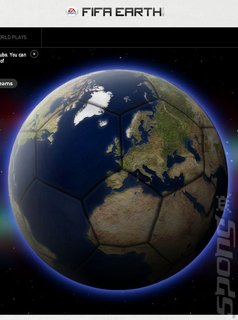 The pitch from EA goes like this: "Through FIFA EARTH players can get closer than ever before to the real life data that drives the EA SPORTS FIFA 10 community. From tracking the number of FIFA 10 games being played online to the number of wins, losses and draws of individual clubs or countries, FIFA EARTH enables you to keep a finger on the pulse of everything happening within the EA SPORTS FIFA community.

"If your club is starting to slide down the league standing, FIFA EARTH alerts you, enabling you to take control into your own hands to win more games and increase your overall winning-percentage. FIFA EARTH enables users to connect to FIFA 10 fans from all over the world, collecting EA SPORTS FIFA tweets and football thoughts as they occur, in real-time."

It has a virtual globe you can rotate with your mouse, which is pretty neat. The website's here.

FIFA fact - either EA's just making up numbers or, going by the counter on the bottom of the website, FIFA 10 games are getting played at a rate of several per second. That's right - several. At the time of writing, roughly 32,807,537 games have been played in FIFA 10, according to the site.
Companies: Electronic Arts
Games: FIFA 10