Ever wanted to play a Wii game? Buy a PS3, and then one of these! 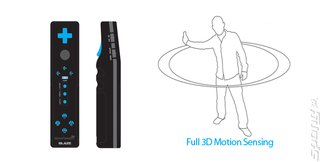 Apparently the 'Blaze PS3 Motion Freedom 3D Controller' aims to detect your movement just like Nintendo's Wiimote, with three dimensional motion sensing and a comprehensive detection system to react to your every move. The device "opens up unthinkable gaming possibilities, allowing you to interact and become one with the hottest PS3 sporting and action titles".

Well, they're right in the 'unthinkable' bit, because we can't think of any games that this would be compatible for, short of patching a whole ton of existing games for compatibility. Which might be the case somewhat, with 'Sega Tennis' (which specific one wasn't really mentioned) and Tiger Woods namechecked as games that will feel more intuitive with the controller.

Fret not though, all you 'hardcore' fanatics, because the PSThrii Remote also has all the buttons you can expect to find on a DualShock 3. Which is nice.

We're a little bit bemused by the announcement, frankly, as any motion sensing activity in PS3 games are covered by either the SixAxis (admittedly with variable results) or the upcoming Sony Motion Controller. Quite why anyone would buy a PS3 specifically to emulate a Wii is anyone's guess. I mean, you could just buy a Wii. They're cheaper and everything.

If you're excited about this though, it's coming soon to a retailer near you. You can keep up with any updates on Blaze's product page.
Companies: Blaze