Now You Can Buy An Exercise Bike For Your Wii 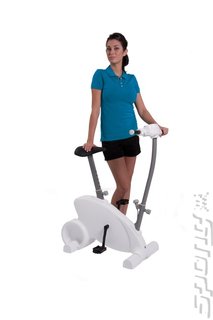 See, you can pose like that too with Cyberbike.
Ever thought the whole fitness regime on the Wii was never enough? Wii Sports, Wii Fit and all the family trainers out there just not satisfying your desire to keep trim? Well, it's a good job Bigben Interactive is around then, as they've announced Cyberbike.

Perhaps the biggest peripheral ever made for the Wii, this cycling game actually comes with a full-size exercise bike. To help you get motivated, there are loads of wacky mini-games that take your cycling to levels untold, like riding crazy land, sea and air vehicles.

Your mission is to cycle down various paths and clear the roads from pollution that is destroying the environment. There's an eco message here too. As ironic as saving the planet by using electricity is, it forms one of many different modes, including a multiplayer mode for up to four people.

Cyberbike is coming in January. You won't be able to miss it for the huge box, really.
Companies: BigBen
Games: Cyberbike