Eliza Dushku to Bring Rubi to the Flicks 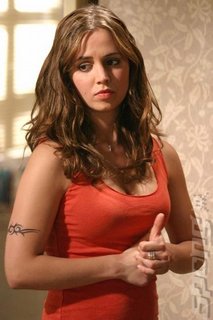 Eliza preparing for her role in WET. Or not.
We didn't like WET. WET was a bit? wet. Eliza Dushku starred as female protagonist Rubi in the game, and Eliza we like. She's hot. So, any excuse to see or experience more of Eliza is definitely a good thing.

She spoke with MTV News about the possibility of reprising her role for a live-action movie, saying that the Rubi character could translate well into a "live-action Dushku vehicle".

"This video game 'WET' I just did, she's got a working class Lara Croft thing going on, and she's pretty kick ass. She travels the globe, she's in Hong Kong and she's in the UK and she's a gun for hire and she's got two samurai swords. She's pretty vicious."

When pressed as to whether she would actually go through, or be in the process of doing a WET movie, Eliza shrugged and simply said "You never know".

Well, we'd hope that she'd at least know herself whether she's doing something like that or not. Either way, WET was heavily influenced by cult films from Tarantino and Rodriguez and the like anyway, so a movie adaptation could bring the story into a medium it belongs.
Companies: A2M Bethesda
Games: Wet