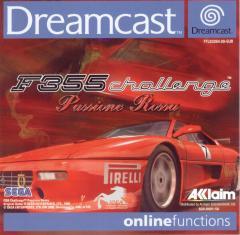 Great game, poo music
We recently brought the news of Sega of Japan asking gamers to vote online as to what Sega music they would like to appear on a ?Best of Sega? compilation CD.

Sega of America has watched the development of said CD with great amusement and was appalled when the terrible music from Ferrari F355 Challenge took up the top two spots. In case you haven?t played the game, the soundtrack really is shockingly poodle-rock bad.

Well, today this situation has changed, much to the relief of music fans everywhere. Here are the latest round of results:

Sega of America had this to say ?When last we looked at the results of the poll, we were aghast that AM2's F355 Challenge was leading the pack with two of its hard-rock tracks. The poll asks Sega fans to choose the most memorable music from Sega's game titles for inclusion in an upcoming compilation CD, and while the F355 Challenge music is certainly memorable, it's the bad horse-manure sort of memorable. Now, a month later, things have changed for the better. The F355 Challenge music is nowhere to be found in the top ten?