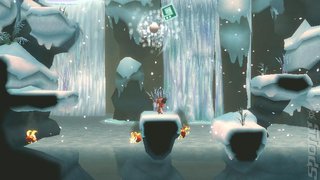 They grow up so fast. Today, Nintendo is marking the historic occasion of its 100th WiiWare game by launching LostWinds: Winter of the Melodias on Friday. No better way to celebrate a game service than to release a game, after all.

LostWinds: Winter of the Melodias has a special reason for being 'the one' however, given that its fantastic predecessor, LostWinds, was the game that kicked off the whole WiiWare platform last May.

David Braben from Developer Frontier is just as excited as we are about playing the puzzle-platforming sequel; "We launched the original LostWinds game on WiiWare with much anticipation, as it was such an exciting and new way to access games. We are now thrilled to be able to mark the 100th game launch with LostWinds: Winter of the Melodias."

The WiiWare title headlines a pretty packed lineup for Nintendo's Store Channel update this Friday. On the Wii, Happy Holidays Halloween is a WiiWare game which lets you create spooky e-cards and ghoulish invitations and send them to a friend's console. The application will cost 500 Wii Points.

The Virtual Console gets some rather tasty love too, in the form of Wonder Boy III: The Dragon's Trap on Sega Master System (500 Points) and the punch-tastic Final Fight 2 from the SNES (800 Points). DSiWare released this week involve a Photo Clock application (200 Points) and Square Enix's Dragon Quest Wars (500 Points).