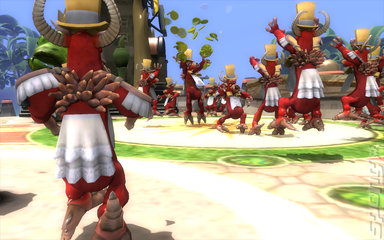 Okay, so the USA apparently can't find a market for a Charles Darwin movie but does think that an evolutionary video game might work. Yes, Will Wright's galactic simulation, Spore, is to be re-envisioned as a Hollywood movie. 20th Century Fox has announced that it has acquired the rights to create a CG animation based on Electronic Arts' build-a-blob game.

Tied to the project is Ice Age and Robots director Chris Wedge, and as far as animated films go, those two were pretty good. So hopefully the act of creating amoebic life, evolving it into two (or more) legged freaks, multiplying and transforming your breed into a culture of space-exploring super-beings will be faithfully represented. Or not. But we have hope.

Reuters (via Yahoo) reports that Wedge hasn't directed a film since Robots in 2005, however, but is on track to direct Warner Bros' The Invention of Hugo Cabret.
Companies: Electronic Arts
People: Will Wright
Games: SPORE