Release date for you to read. 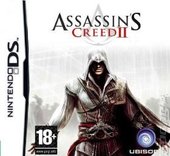 Back in July we confirmed that Ubisoft was bringing Assassin's Creed to Nintendo handheld. Today, we're telling you that Assassin's Creed II: Discovery is not only due on November 20th but that DSi owners get to use their camera in-game.

Take the snap and then attach the pic to 'Wanted' posters that crop up on your Spanish quest to free your pals from the Inquisition.

Developer Griptonite (Assassin's Creed: Blood Lines on PSP and iPhone) is in charge of making it happen.