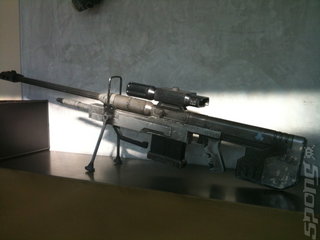 It could have been one of the most horrifying events ever to befall the games industry - a man with a huge assault rifle was seen near the Bungie studios, prompting police (and even a SWAT team) to be called in. As it turned out, it was not a crazed shooter so much as it was a Bungie employee carrying a Halo weapon replica.

Police were called in after the weapon was spotted and mistaken for an AK-47 in the company's Kirkland, Washington (USA) neighbourhood at around 4:20pm on Wednesday afternoon.

The weapon was a replica of a UNSC sniper rifle used for the live action Halo shorts from Neill Blomkamp (he's famous for making District 9 now). Frankly, if you saw someone carrying one of those big b@stards and couldn't work out that its NOT REAL, you would be bloody terrified.
Companies: Bungie
Games: Halo 3 Halo 3: ODST Halo: Reach