FIFA 2002 Sets Out to Re-Invent the Beautiful Game

Electronic Arts to roll out yet another FIFA football title. 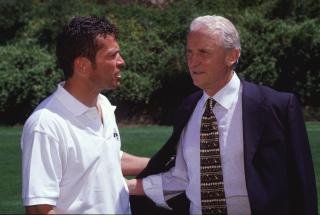 Matthaus and Trapattoni
All Images (2) »
Another year, another FIFA game from EA Sports. FIFA 2002 is due to appear in October and November this year on PC, PSOne and PS2. Don?t look too surprised. There is, after all, a FIFA World Cup tournament next year, to be held in Japan and South Korea. So EA clearly feel even more entitled to bother football fans? wallets once again.

To celebrate this, EA Sports hosted an exclusive event earlier this month at the Centre Technique National Fernand ? Sastre in Paris (oui, c?est vrai) with some of football?s greatest contemporary names. Amongst the players and coaches at the event were Giovanni Trapattoni, the current Italian coach and arguably the most successful European manager in history. Joining him were Iker Casillas (Real Madrid and Spain), Tomas Radzinski (Anderlecht), Nawaf El Temyat (Al-Hallil, Asian Player of the Year) and the most-capped German player of all time, Lothar Matthäus. Alan Ball and Mark Lawrenson were there too, but let?s focus on the good stuff! The players and managers not only explained the gameplay advances in FIFA 2002 but also demonstrated their skills on the pitch.

The players detailed how EA Sports has utilised proprietary technology to introduce a new system of passing , which gives the player total control over the ball?s movement. Members of the FIFA 2002 development team were on hand to detail the technical side of this revolution in game design. Marc Aubanel, Executive Producer of FIFA 2002 comments, ?It?s great to bring FIFA 2002 to such a great audience in such a stunning venue. We hope to surprise a few people with the steps we?ve taken to make the perfect football game.?
Companies: Electronic Arts
Games: FIFA Football 2002