A Football Story from EA

Dust off the sheepskin, you're a football manager again. 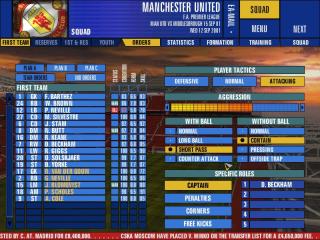 All Images (2) »
EA Sports is gearing up for the new football season again. Not only is there another instalment of their lauded FIFA series coming to PC, PSOne and PS2 later this year but the end of August also sees the return of the FA Premier League Manager series on PC. This time around, it’s called FA Premier League Manager 2002. What do you mean, you could have guessed that? If you think you’re so smart, try taking the team of your choice to the top. Not an easy job, that’s why you do what you do, and bonafide managers are made of sterner stuff, out on the touchline, doing it for real. However, if you must subject yourself to the torture of virtual football management, there is plenty here to make you tear your hair out in frustration.

It’s not just about tactics and team selection, you see. The manager decides whether to build training grounds and centres of excellence to improve play, or hotels and shops to increase revenue streams. All of this while keeping the squad fit, developing the youth team and monitoring players individual form and development, making for the deepest and most involving management game around. There is also the on-pitch tactical contest, where the manager can make real life decisions that will impact the game as he watches his players do battle.

EA Sports have once again secured the FIFPro License, that includes all the names and likenesses of FIFPro's member player associations. The match engine and player AI has been significantly improved from last time out. There’s even a facility for your manager character to bark instructions at the team while they’re in the thick of the match (shoot, pass etc.). In accordance with UEFA and FIFA rulings, the domestic and international transfer codes and windows have been incorporated. If you see a player you like, not only do you have to move fast to get him, you also have to outwit his other potential suitors. It’s a bit like real life, but you can turn this one off.

If there are any dedicated footy fans, who haven’t already sampled the joy and pain of management simulation, FA Premier League Manager is a great place to start, and the 2002 version, with its up to date statistics, is certainly worth waiting for.