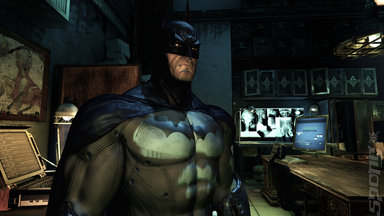 Batman: Arkham Asylum has apparently 'broken' the World Record for 'Most Critically Acclaimed Superhero Game Ever'.

According to the announcement, "The game has broken the Guinness World Record in this category by achieving the highest average score of 91.67 from reviews around the world." That average score comes from Metacritic.

'Broken'? We've had a look around and for the life of us we can't see who held the record before Batman: Arkham Asylum 'broke' it. If anybody can tell us who held this record before it was broken, get in touch - especially if you're from Guinness World Records. We promise not to set the "Laughing out loud in your face at the audacity and pointlessness of this rubbish" world record.

Don't get us wrong, we thought Arkham Asylum was great - Mark SPOnG gave it a 92% in his review - but 'Most Critically Acclaimed Superhero Game Ever', really? It's a bit of niche category. It's a bit like the sarnie Mark had at lunch getting the world record for 'Best sarnie Mark had at lunch on 28/08/2009'. It was a good sarnie, but there wasn't a lot of competition.

Only one that really comes to mind would be the Batman game on the Amiga and Atari ST that accompanied the Tim Burton movie back in the day. That was a great game at the time, but I'm not sure there are really many records of scores from back then.

Though more likely is Marvel Vs Capcom 2 (http://www.metacritic.com/games/platforms/drm/marvelvcapcom2) on the Dreamcast with 90%


Anyway, define 'Superhero'. According to Wikipedia (http://en.wikipedia.org/wiki/Superhero):
A superhero (sometimes rendered super-hero or super hero) is "a fictional character of unprecedented powers dedicated to acts of derring-do in the public interest"

By that definition, would Mario not be considered a superhero?
In which case Super Mario Galaxy, with 97%, should be the record holder.
Or maybe Zelda? Ocarina of Time managed 98%

Of course, if you take the "unprecedented powers" part seriously, then that would exclude Batman anyway.

Svend Joscelyne 3 Sep 2009 09:42
2/2
You know, when I held the Summer of Sonic convention last year, I'll admit I did try to convice the Guinness guy to give us an award for something silly like "Biggest convention for a computer game character". The chap said no, because it was too niche.

Guess "Best game based on a superhero" just has miles of contenders, eh? Gotta love the iromoney (irony + money = iromoney). :)
Posting of new comments is now locked for this page.