Also a chance to travel around Europe. 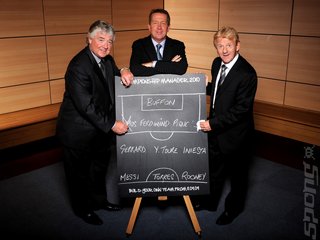 Joe, Curbs, Wee Gordie. The word on the board is 'Buffon' not 'Buffoon'.
Eidos has released a demo of the forthcoming Championship Manager 2010 footy management game. In order to entice you even further into the world of ensuring that soccer-kicking types score goals and don't concede them (simple premise, difficult execution), there's also a trip around Europe for two up for grabs.

It's not a bad looking demo either, containing six in-game months of playable frustration, heartache and possibly success. Better still, the games played and saved in the demo are usable in the full game when it's released in September.

There's also a competition here for two people to whizz around Italy, France, Spain and England watching football, tickets, travel and hotels paid - and probably without getting your head kicked in by Ultras.