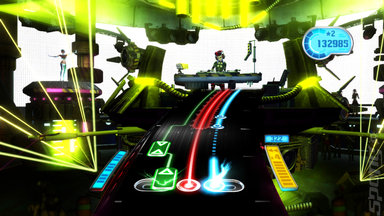 All Images (5) »
You can add another couple of names to the list you've been making (we know you have) of 'DJs contributing exclusive mixes to DJ Hero'. Those names are DJ Yoda and Scratch Perverts.

If you need an introduction - the Scratch Perverts, a British bunch, won the first DMC (Disco Mix Club) World Team Championship in 1999. DJ Yoda... actually, we're going to turn you over to the Activision press release. There's something awesome about a press release telling you he's "one of today's hottest DJs tearing it up on the ones and twos." It's a bit like your ancient editor telling you about Punk.