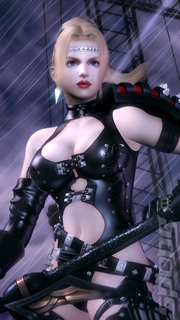 All Images (11) »
Tecmo Koei is interested in Sony's upcoming motion control tech, but reckons that incorporating it into Ninja Gaiden could be a bit too knackering.

Speaking to Play magazine the company's president, Kenji Matsubara, was asked about the Sony tech. He responded, "I?m very interested in the new motion-control technology announced at E3, but we really need to know how responsive it is.

"I?m sure that for casual games these motion controls will be very popular, but for action games like Ninja Gaiden we need quick responses and if you're swinging your arms around like you?re using a sword you will soon be tired.?

He went on to note that ?Maybe we have to change the playing style and check the technology to see how quick it can be... So, at first it will be casual games and then maybe hardcore games and we have to prepare for that and provide the games to satisfy that playing style.?

Presumably Matsubara's comments are also applicable to Natal. SPOnG hopes so. We quake in fear at the prospect of having to learn mad ninja skills from a beardy old man who only lets us eat rocks before Ninja Gaiden 3 comes out...