Lampard and Walcott Join Rooney on Front of FIFA 10

Arsenal play it in the dressing room 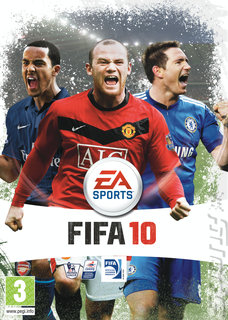 EA has confirmed that Chelsea midfielder Frank Lampard and Arsenal?s 'rising star' (and right wing striker), Theo Walcott, will join Wayne Rooney on the cover of FIFA 10 in the UK.

Some cover stats: this is Rooney's fifth year on the front of a FIFA game, Walcott's a cover virgin while Lampard appeared once before on 2006 FIFA World Cup.

As is the way with these things, they're all pretty 'pleased', 'delighted' and 'honoured' to be gracing the game's box.

?FIFA is definitely the best football game on the market, and I am delighted to be featured on the cover again?, uttered Manchester United and England striker, Wayne Rooney. ?I play the game regularly online and against a lot of the lads at the club and I?m looking forward to the 360 degree control as it will make FIFA even more realistic than any other football game out there.?

?I?m really pleased to be part of the EA Sports FIFA franchise. Being on the cover of this great football video game with such a long history is really special for me?, said Lampard.

"To join the likes of Wayne Rooney and Frank Lampard on the cover of FIFA is a huge honour for me", said Walcott. "FIFA is the game of choice in the Arsenal dressing room so I'll have to keep on top of my game to make sure I?m the best FIFA 10 player at the club."

against wayne rooney and the english 7 Aug 2009 12:26
1/2
why is wayne rooney on the cover he is a white pig with a case of swine flu he must be mutilated at old traffod

Tim Smith 7 Aug 2009 14:08
2/2
against wayne rooney and the english wrote:
why is wayne rooney on the cover he is a white pig with a case of swine flu he must be mutilated at old traffod

He's on the cover because he is recognisable and sells products. He's also a good footballist. Why who would you have had on the cover. Personally I would like to see Stan Bowles and Frank Worthington with Tony Currie. That would be minty fab.