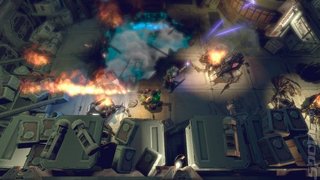 Alien Breed Evolution
In an exclusive interview with SPOnG Team17's founder, Martyn Brown, has provided insight into some of the reasons that the Yorkshire-based company has made the switch to digital delivery of its titles.

The following extracts of the frank interview to be published this afternoon gives you some insight into why the company has rejected traditional publishing deals and is instead ploughing it's own digital-only furrow:

"We've had probably a decade where we've been 'leveraged' for one reason or another by third-party publishers; be it time, be it money, be it their whims within the project, their view of the marketplace.

"We've worked on projects with publishers who told us to pull features, then we get the criticism from the user-base, which is no fun at all.

"Obviously the end users just don't understand that sort of stuff and we get all the flak, even though we were told we'd be looked after in terms of who made that decision."