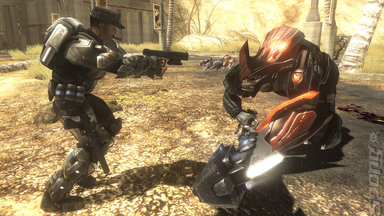 Right, Peter Jackson says he's not doing a Halo movie. Neill Blomkamp says that he wouldn't work on it even if he was offered it (but then again, he might). Microsoft, however, appears to be behaving like an ex-boyfriend who refuses to accept that the relationship is dead.

Before you read the platform holder's statement, you should pull out your PR translator and crank it up to 'Screaming Hell''. It goes like this: "Microsoft Game Studios is deeply committed to supporting and strategically growing the Halo franchise, and our relationship with Peter and his team is something that we greatly value.

"Given the bandwidth of both of our companies we've decided to put this joint effort on hold and prioritize resources against other projects like Halo 3: ODST, Halo: Reach and Halo Legends."

You could, if you were so inclined, call Michael Jackson's life "on hold"...

Someone really should tell Peter Jackson about it all, because he recently told Joystiq, "That Halo project is no longer happening, it sort of collapsed when the movie didn't end up happening."

The reason for the cancellation, according to an LA Times article quoting Ken Kamins (Jackson's manager), was that Jackson just didn't have time, thanks to other projects such as films District 9, Tintin and The Hobbit. The upshot was reportedly that in January Microsoft pulled the plug as it looked to scale back on Halo projects.