Who you gonna call? Sony! 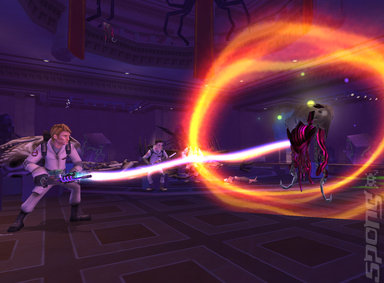 Atari has had a very good first financial quarter seeing, "first quarter revenues for fiscal year 2009/2010 (ended June 30, 2009) with a 30.1% growth year-on-year". It's good news to see at least one publisher showing growth.

The PlayStation 3 was a particular stand-out in the total revenues, moving from 12.1% of revenue in the Q1 of 2008/09 to 24.6% in the same quarter this year: yup, the PS3 contributed twice as much this time (if you're fascinated by this stuff, a table of what each platform contributed to revenues is at the bottom of this story).

Both Chronicles of Riddick and Ghostbusters did great business, and there's a particularly interesting statement included in Atari's press release regarding the latter.

"In addition, US operations revenue was driven by licensing operations, such as the deal signed with Sony Europe to launch Ghostbusters: The Video Game exclusively on PlayStation in Europe."

You will also have noticed the simple fact that "US operations revenue" was helped by the deal signed with Sony Europe. As far as we can see this means that a deal of cash changed hands for the PS3 European timed exclusive.

Not contributing to the revenues for this quarter, however, were 37 million euro paid by Namco Bandai Games Europe to Atari for the 66% stake in Distribution Partners that saw Atari exit European and Asian distribution. This deal was signed in on July 7th.