Assassin's Creed 1 was expected to do less well than sequel... until the PSP. 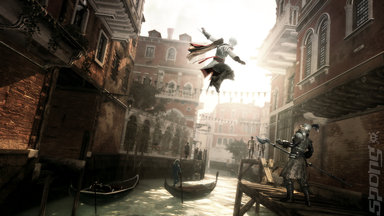 So, which platform has changed the playing field for AssCreed2?

"Most of this out-performance of 15% actually comes from the fact of the addition of one platform: the PSP on which Assassin's Creed 1 was not released in the past. And around half of this performance is done with guaranteed bundles."

Sure, this sounds very much like Assassin's Creed 2 will be heading for the PSP. Indeed that would make a fine story. However, the reality is more likely to be that Martinez is referring to Assassin's Creed: Bloodlines when he mentions these numbers to investors.

It also sounds as if the Assassin's Creed 2 (or Bloodlines) bundle for PSP is a deal well done, if not for Sony, then certainly for Ubisoft.